GNI Report – The Economic Impact of Disruptions to Internet Connectivity

The Global Network Initiative today launched a new report: “The Economic Impact of Disruptions to Internet Connectivity,” which highlights the significant economic damage caused when governments around the world deliberately shut down or disrupt Internet services.

The report, which was prepared by Deloitte and made possible by funding from GNI member Facebook, lays out a framework for measuring the costs of shutdowns in terms of the daily gross domestic product lost in countries with varying levels of Internet connectivity.

Based on this approach, the report estimates that an average h 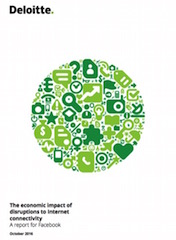 “Governments should recognize the serious consequences of disrupting network access and see shutdowns through a human rights and development lens, not solely through a political or security lens,” said GNI Independent Board Chair Mark Stephens, CBE.

The government-mandated disruption of communications networks—including social media, Internet messaging services, mobile, VOIP and SMS—is a growing global problem. A recent study by the Brookings Institution documented some 81 shutdowns in the year between July 2015 and June 2016. That report estimated the total cost of shutdowns to be in excess of $2.4 billion over that period. Ethiopia, India, Brazil, Turkey, Morocco, Pakistan, the Republic of the Congo (Brazzaville) and Saudi Arabia are just some of the governments that have disrupted their citizens’ Internet access over the past year.

“Shutting down the Internet undermines economic activity and chills free expression,“ said GNI Executive Director Judith Lichtenberg. “The economic and human rights harms of network shutdowns reinforce each other, and are of particular concern in developing countries, emerging and fragile democracies, and jurisdictions with weak rule of law.”

This analysis suggests that the ongoing Internet shutdown in Ethiopia, a low-connectivity country with a population of 94 million and a per capita GDP of US$505, is costing its economy just under half-a-million US dollars a day in lost GDP.

The report underlines the need for governments to recognize that even temporary restrictions or reductions in Internet speed harm business and social activity online because they render some services unusable.

The report suggests avenues for future research on this critical issue. More work is needed on the effects of shutdowns on consumer and business confidence, the opportunity costs for businesses and the wider economy, and the social and human rights harms when families are cut off from one another and their access to basic health, education, and other vital services and information is restricted.

“The report is an important contribution to the research needed on the impact of shutdowns, said Mr. Stephens. “We encourage academics, development agencies and others to build on this work so that the true costs of shutdowns can be properly measured and understood, and so we can engage governments and prevent their use.”

More information on network shutdowns and the Global Network Initiative

Global Network Initiative and Telecommunications Industry Dialogue joint statement on network shutdowns, July 12. For the first time, Internet and telecommunications companies joined together to express their deep concern at the spike in shutdowns globally: “ Network shutdowns and the wholesale blocking of Internet services are drastic measures that often risk being disproportionate in their impact. Governments who employ these measures often do so without justifying them as necessary and proportionate under international human rights standards.”

In a recent landmark resolution, the United Nations Human Rights Council stated that it “Condemns unequivocally measures to intentionally prevent or disrupt access to or dissemination of information online in violation of international human rights law.” The UN HRC specifically “calls on all States to refrain from and cease such measures.”