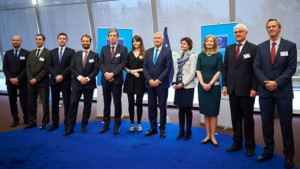 The Global Network Initiative is pleased to announce that it is joining with global technology firms and technology and telecommunications trade associations in a new partnership with the Council of Europe to promote respect for human rights and the rule of law.

The statement from the Council of Europe is below. The following quote can be attributed to GNI Executive Director, Judith Lichtenberg:

“By forging this partnership, the Council of Europe is investing in dialogue between states, companies, and civil society to address the critical global digital rights challenges all countries face.”

“The inclusion of GNI’s unique multi-stakeholder alliance – companies, academics, investors, and civil society organizations – will foster a broad, deep, and ongoing conversation on human rights in the digital age.”

Statement from the Council of Europe

Strasbourg, 08.11.2017 – The Council of Europe will strengthen its co-operation with the private sector in order to promote an open and safe internet, where human rights, democracy, and the rule of law are respected.

Council of Europe Secretary General Thorbjørn Jagland signed the agreement – in the form of an exchange of letters – with representatives of eight leading technology firms and six associations during a ceremony in Strasbourg on the first day of the World Forum for Democracy.

Areas of co-operation to be explored include the protection of children against sexual exploitation and abuse, freedom of expression and internet intermediaries, the right to privacy and the protection of personal data, education for democratic citizenship, gender equality, countering cybercrime and terrorism, culture and digitisation, among others.

The partnership agreement is among the priorities set in the Council of Europe’s Internet Governance Strategy for the period 2016-2019, which aims to involve all internet actors, including civil society, the private sector, the academic community and the media.

Speech delivered by the Secretary General