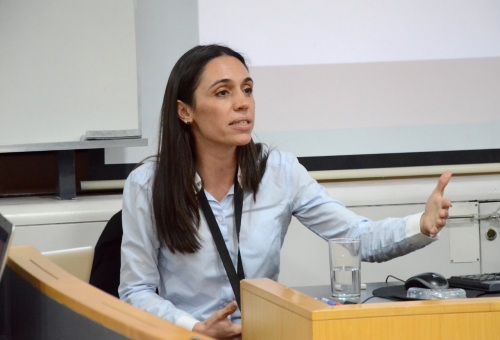 The Global Network Initiative (GNI) is very pleased to announce Agustina Del Campo’s appointment as GNI Vice Chair. Agustina was unanimously elected for this position during GNI’s 2021 Annual Meeting of Members and she will serve for the remainder of the current board term, through March 2023.

Agustina is the Director at the Centre for Studies on Freedom of Expression and Access to Information (CELE) at Universidad de Palermo, Argentina. CELE has been an academic member of GNI since 2011, and Agustina has represented CELE as academic alternate board member since 2016. She will fulfill the vice-chair position in her personal capacity. Agustina has a law degree from the Catholic University in Argentina and an LL.M. in International Legal Studies from American University, Washington College of Law, where she led the Impact Litigation Project and coordinated research and litigation of several freedom of expression cases before the Inter-American Commission and Court on Human Rights. Agustina has extensive experience in human rights training, particularly as it relates to freedom of expression and the press in the Inter-American human rights system. She has lectured throughout Latin American and the U.S and authored and/or contributed to over a dozen publications.

“I am delighted to continue contributing to GNI’s mission in this new capacity as vice chair and look forward to supporting GNI’s Independent Chair and Executive Director in this role. It is an exciting time for GNI, as it enters its second decade and faces constantly evolving geopolitical, technological, policy, and regulatory landscapes,” said Agustina.

The vice-chair role was formally created by the GNI Board to provide additional capacity, support, and expertise to the Independent Chair, the Executive Director, and GNI Staff; facilitate the growth and inclusive engagement of GNI’s increasingly diverse membership; and increase GNI’s ability to shape regulatory developments and understandings of corporate responsibility around the world.

“I look forward to working with Agustina as GNI’s Vice Chair to promote the GNI Principles and support the continued growth and inclusion of GNI’s increasingly global membership. Agustina’s record speaking on behalf of human rights is unquestionable, as is her commitment to promoting a diversity of insights and perspectives within GNI,” said GNI Independent Chair David Kaye.

“We are thrilled to have Agustina in this new vice-chair role. Not only she is familiar with GNI’s work and operations, having contributed to our strategic thinking and meaningful engagement practices, but she will also bring to GNI’s leadership her well-rounded expertise in international law and human rights and familiarity with various regional perspectives,” said GNI Executive Director Judith Lichtenberg.