Responding to Online Extremism Without Harming Free Speech and Privacy 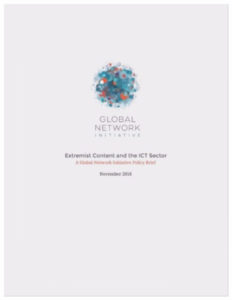 AMSTERDAM AND WASHINGTON, DC—Today the Global Network Initiative (GNI) released a new policy brief with recommendations for governments and companies to protect and respect free expression and privacy rights when responding to the challenge of alleged extremist or terrorist content online.

This brief, which reflects the consensus view of GNI’s multi-stakeholder membership of companies, civil society organizations, investors, and academics, is being released amid escalating government calls for action or legislation around the world to monitor or restrict access to online content on the grounds that it allegedly radicalizes individuals, supports terrorist organizations, or encourages violence or terrorist acts.

“Technology companies have a role to play in addressing national security concerns, but the pressure to censor raises serious human rights risks,” says GNI Independent Board Chair Mark Stephens, CBE. “Anti-terrorist laws have been used to silence, harass and imprison individuals around the world, including dissidents, journalists, writers, human rights defenders and ordinary citizens expressing their views on social media.

The rule of law, transparency, and due process are essential when governments turn to technology companies to help them fight terror,” he continued. “The GNI’s recommendations demonstrate that there is broad agreement amongst a diverse group of international stakeholders on the practical protections that all governments and companies need to ‘bake in’ to ensure freedom of expression and privacy are not sacrificed.”

“Accusations of extremism have been used by governments around the world to restrict legitimate speech and retaliate against critics and reporting by journalists, so it is important that governments and technology companies alike have a transparent approach subject to due process when removing content or closing accounts accused of violent extremism,” said Courtney Radsch, Advocacy Director at the Committee to Protect Journalists.

“Terrorism is one of the urgent issues of our time and we have a collective responsibility to combat use of internet technology to promote or recruit for it”, says Steve Crown, Vice President and Deputy General Counsel, Microsoft, and a member of the GNI Board. “Any solution to this challenge must respect timeless values including the rule of law, privacy, freedom of expression and the right to access information. This policy brief is intended to help identify a path forward that does that.”

“Global internet use has grown by over a billion people in the past five years, but the world’s newest users have joined an internet that is significantly less free and open than it was five years ago,” said Rebecca MacKinnon, Director of Ranking Digital Rights. “These GNI recommendations provide a solid basis for an urgent ongoing dialogue: how we ensure human rights are not the primary casualty when governments pressure companies to police extremism online.”

“As governments around the world develop policies aimed at preventing terrorist acts, they must also ensure that these policies don’t create collateral damage for fundamental rights and the rule of law,” said Emma Llanso, Director of the Free Expression Project at the Center for Democracy and Technology. “In particular, we hope these recommendations spur more action on access to remedy, and the appeals mechanisms that must be available when a person’s lawful speech has been taken offline due to government pressure.”

GNI and our members will use these recommendations as the basis for future policy engagement and shared learning with governments and international institutions worldwide, and we will continue to build on this work.

“Now more than ever, governments and companies must work together with a wide range of global stakeholders to craft human rights-based policies and practices to tackle the thorny challenges surrounding extremist content online,” said GNI Executive Director Judith Lichtenberg.

Launched in 2008, the Global Network Initiative is an international multi-stakeholder organization that brings together information and communications technology companies, civil society (including human rights and press freedom groups), academics, and investors to forge a common approach to protecting and advancing free expression and privacy. GNI members commit to and are independently assessed on GNI principles and guidelines for responding to government requests that could harm the freedom of expression and privacy rights of users.